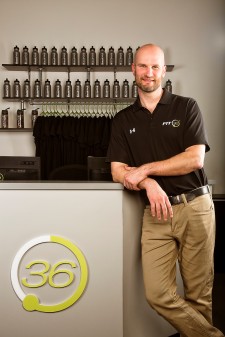 Many veterans are returning to the U.S. looking for work. Abe Dispennette chose franchising and has discovered his military instincts have been good for business.

Highlands Ranch, Colo., May 26, 2016 (Newswire.com) - ​Abe Dispennette returned to civilian life four years ago. Having served eight years in the Army and retiring at the rank of Captain, he became an insurance agent, met his business partner, and together they opened a FIT36® studio in Denver. Dispennette says two military instincts have served him well as an entrepreneur -- teamwork and decisiveness -- as well as his experiences overseas, which have helped shape his character.

Dispennette was studying counseling in college, but could never shake his desire to serve. His recruitment landed him with the 101st 502 Infantry, the unit documented in the HBO series, “Band of Brothers.” The unit was revived for Iraq and Afghanistan. His mission was medevacking wounded soldiers and counseling those who had experienced the traumas of war. His heart was in making the world a better place and to make a difference.

“In Afghanistan, it really is survival of the fittest. The three major causes of death for the people are leftover Russian mines, snake bites and childbirth. The orphan problem is huge and most people are so poor; so the kids rarely reach adulthood,” says Dispennette. “On one of our missions, we came across a small community near the Pakistani border with about 20 orphans. This was really unusual, because these people have so little. That this community would take on such a burden and sacrifice for these kids really touched our unit and we had to help.”

Dispennette’s unit banded together for “Operation Expect Mercy,” reaching out to the U.S. to donate blankets, shoes, candy, food and soccer balls. The kids really needed clothes, but it was dangerous to dress in American attire. The soldiers took up a collection within their unit and raised $6,000 to have a local merchant get them clothes of various sizes that would take them into adulthood.

“The appreciation on their faces was overwhelming,” says Dispennette. “There is such thankfulness from the community and kids. I have great empathy for how little they have.”

His experience would ultimately change his life course. When he finished his military service, Dispennette was planning to get a PhD in counseling, but after what he’d been through and seen, he rerouted his career track to apply his experiences in a more entrepreneurial manner. He went for an MBA instead and found work with an insurance agency. He was awarded his own office, where he has learned a lot about business and marketing. It was also where he met his soon-to-be business partner, Steve Cronin.

Dispennette and Cronin were interested in a fitness studio, and their research led them to FIT36®. They loved the concept and were attracted to the community feel within the studios.

“WellBiz Brands, the FIT36® franchisor, had a great track record in terms of knowledge and experience in franchising,” says Dispennette. “They were also veteran-friendly, offering me $5,000 in area rights. I think they really appreciate what I bring to the table with my experience in the military.

“It’s so fulfilling to create a community. No one thanks you as an insurance agent, but everyone at FIT36® is thankful for the time and effort we’ve put in to build this business. It’s just become something much bigger than me.”

Dispennette advises any vet considering getting into business to surround themselves with good people and to use their military instincts.

“We are instinctual people. Our training has been invaluable. We are trained to respond, assess a situation and take on the challenge. Decisiveness is very helpful in business and it’s served me well. We have great people working with us. We trust each other. I like that because in the military, it’s all about the team.”

This weekend is Memorial Day Weekend and for men like Dispennette, it has special meaning.

“Thankfulness for the people who gave the ultimate sacrifice,” says Dispennette when thinking about what this holiday means to him. “It’s a solemn day and I am eternally grateful that I made it out alive. I’ve been given the opportunity to live my American dream and I hope I can help others create theirs.”