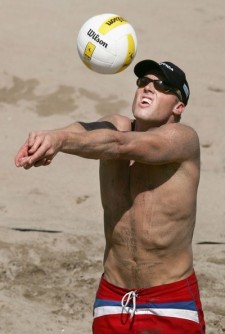 As men reach their 40s, most have to make changes to their diet and exercise habits to maintain peak fitness. Without changes, they begin to lose muscle mass and gain weight. Former Olympian Beach Volleyball player Dax Holdren talks about the changes he's had to make to keep up with his kids and maintain his status as an elite athlete.

Highlands Ranch, Colo., July 11, 2016 (Newswire.com) - ​​​The inevitable and irreversible process of aging tends to show its true colors for the first time around the age of 40. Heck, you’re considered over the hill at 40. Not exactly a societal self-esteem booster, however hitting 40 is a natural time to start thinking further down the road and considering the importance of living a healthier lifestyle.

As the body ages and changes, it is important to maintain a healthy exercise and nutrition program. According to the Mayo Clinic, peak muscle mass is reached in one’s early 40s and then muscle loss begins, causing an increase in body fat percentage. Meanwhile, the Office of Disease Prevention and Health Promotion (ODPHP) recommends all adults avoid inactivity and maintain at least 150 minutes of moderate-intensity exercise weekly, 75 minutes of vigorous-intensity exercise weekly or an equivalent combination of both moderate and vigorous-intensity aerobic workout.

Losing muscle mass? Disease prevention?  That’s why it’s so important to work out more in your 40’s than at other ages, and to find a routine that works for you. The thought of not living a healthy lifestyle is something former Olympic Beach Volleyball player Dax Holdren, 43, has never considered. However, once Holdren started to feel like his body couldn’t take the pounding of beach volleyball and the type of training he was doing, he knew he needed to change things up.

“As I’ve gotten older I have really prioritized a mix of workouts like running, and different sports, but I really focus on cross-training, which is why I work out at FIT36®,” Holdren said, referring to the high intensity interval training studio in Denver where he currently trains. “I have made a conscious effort to train smarter, but probably harder than I ever have. I want to be able stay fit for as long as I can and keep up with my teenage boys. I want to beat them at sports for as long as possible, but to do so I have to make sure to work even harder than I did when I was younger.”

Finding a successful fitness regimen at 40-plus can halt the effect of muscle-loss, while also keeping vital organs, such as your heart, as healthy as possible in the later years. However, Holdren believes to get the results you did at a younger age, being smart about what you put in your body is just as important as working out hard.

“I think that as you get older it is probably 80 percent about what you put in your body, and 20 percent about how you train your body,” Holdren said, noting the importance of nutrition. “I can’t go eat fast food and play basketball 20 minutes later like I used to. If I eat something I know I shouldn’t, it has a huge effect on my body, my energy and my dedication level.”

Not surprisingly, the nutrition needs of men also change with age. The 2015-2020 Dietary Guidelines for Americans reflect some nutritional changes that men should consider in their 30s and 40s. While the amount of recommended macronutrients for men doesn’t change much as they approach 40, the recommended caloric intake does drop from 2,400-3,000 calories daily to around 2,200 calories daily.

Couple the importance of nutrition with the importance of cardio exercise, which according to the Centers for Disease Control (CDC), heart disease is one of the top health concerns for men as they age, not eating properly and not working out is the biggest combo to avoid for men 40-plus. This isn’t a revolutionary finding, but reversing these effects starts with a dedication to a healthy lifestyle, and waiting isn’t a chance anyone should be willing to take.

“It’s pretty simple but the longer you wait, the harder it is to get in shape,” says Holdren. “If you get in shape in your 40’s, you have a greater chance of staying in shape at a later age and continuing to do the things you enjoy for 20, 30, 40 more years. That’s what it’s all about for me.”

Fitness and nutrition should be a lifelong goal for all men, but it’s never too late to begin a health and wellness regimen at 40 and beyond.